Dr. Sara Renner, Dr. Alyssa Morris, and Dr. Heather Baxter will join together for the Midwest premiere of Alyssa Morris’s composition “Parable of a Stormy Sea,” and other incredible repertoire for this woodwind trio. 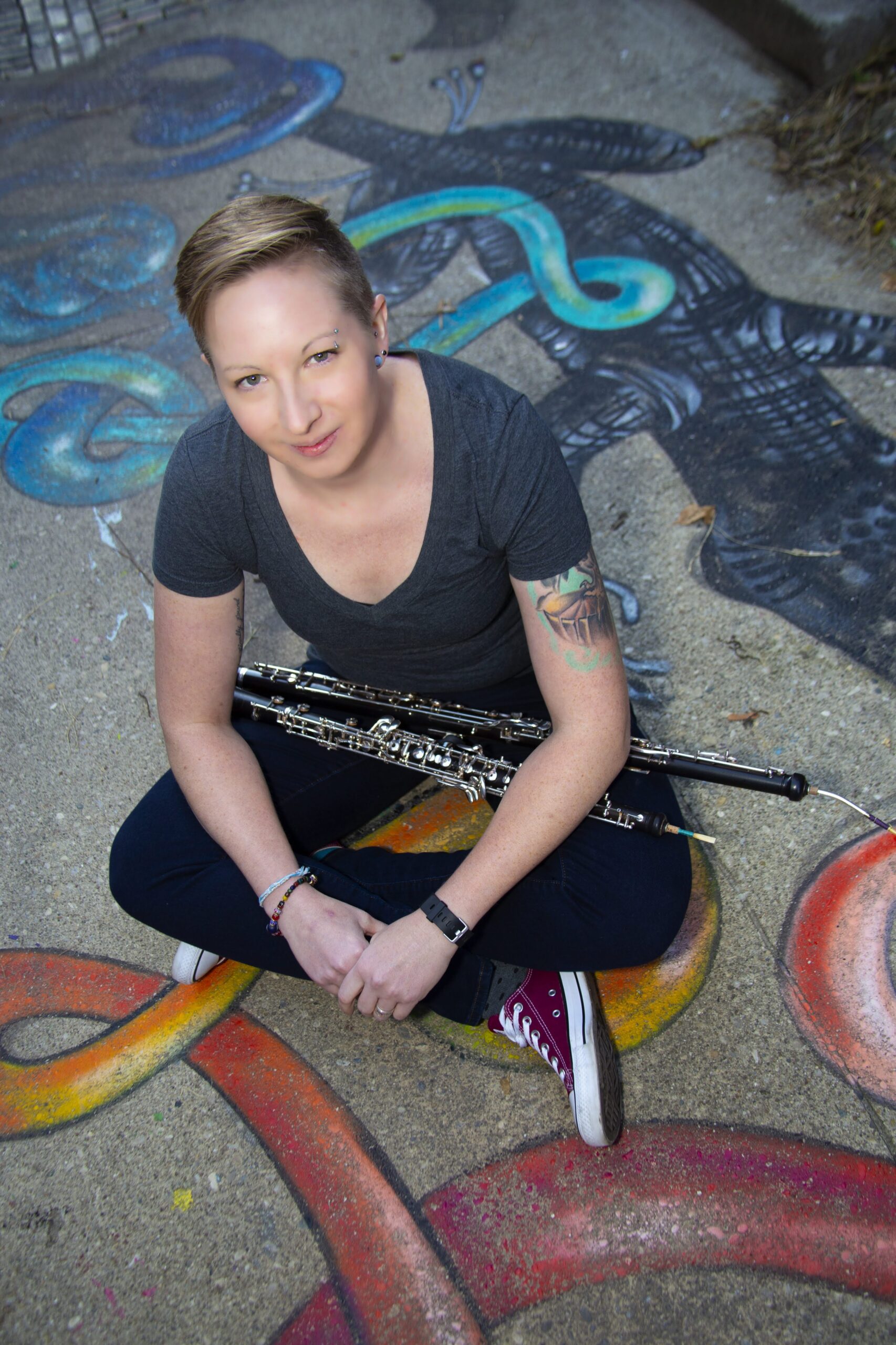 In the summer of 2017, Sara joined the festival orchestra of OperaMaya as Principal Oboe, where she performed across the Yucatan Peninsula. During this time, Sara was also invited to serve as the Guest Principal Oboe for the Camerata de Cancun. In 2018, OperaMaya made history as the first Western classical music performance in the city of Mahahual, and in 2019, the first Western classical music performance in Francisco Uh May, Tulum. Sara was recently appointed as a member of the Woodwind Faculty for OperaMaya’s tenth season in 2020.

Sara’s research and scholarly interests lie within the realm of theology as performance and connecting early music to contemporary works. Her article “A Musical Sacrament: The Trinity of James MacMillan’s The World’s Ransoming” was a featured article in the 2020 International Double Reed Society Virtual Symposium, and is published in The Double Reed, Vol. 43, No. 2.

Sara holds both a Bachelor’s and Master’s degree in Performance from the University of Nebraska-Omaha and the Columbus State University Schwob School of Music, respectively. She received her Doctorate of Musical Arts in 2019 from the University of Cincinnati College-Conservatory of Music, where her secondary discipline was Musicology with an emphasis in Early Music. Her teachers include Dr. Mark Ostoich, Dwight Parry, Christopher Philpotts, and Dr. Susan Hatch Tomkiewicz.

When not making oboe reeds or practicing, Sara enjoys yoga, running, and scary movies. She volunteers annually at Calvin Crest Camp, Conference, and Retreat Center in Fremont, NE as a camp counselor for high school students.

Alyssa Morris has delighted audiences around the world with her “exceptional” and “soulful” musicianship (Fanfare.) American Record Guide describes her playing as “stunning,” exhibiting “unmistakable…virtuosity.” Alyssa serves as Assistant Professor of Oboe and Music Theory at Kansas State University, and as the principal oboist of the Topeka Symphony Orchestra and Wichita Grand Opera. She has appeared as a soloist in venues throughout the United States, Scandinavia, the British Isles, and Western Europe. She performed as a concerto soloist at the Kennedy Center, and with the Topeka Symphony in a performance of her original concerto Dreamscape. Alyssa was a recitalist at the 2014, 2016, and 2018 International Double Reed Conventions in New York City, Columbus, Georgia, and Granada, Spain, and a featured performer at the 2021 Virtual International Double Reed Symposium. Alyssa has been a featured performer and composer on National Public Radio’s program “Performance Today,” and live on Kansas Public Radio’s program “Classical Music in the Morning.” 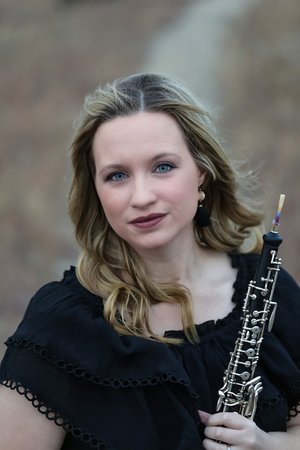 An award-winning oboist, Alyssa is a 2021 American Prize semi-finalist in the Solo Instrumental and Virtual Performance divisions, was a Music Teachers National Association state first prize recipient, a recipient of 2nd prize at the MTNA Semi-Finals, and a three-time winner of the Utah State Fair performance competition.  Alyssa was a 2016 PEO scholar, and was selected as the Idagrace Guy Endowed Scholar. She was the only music major in 2016 to receive a top ten position in this competition amongst the hundreds of female doctoral students who applied from the United States and Canada.  As a PEO scholar, Alyssa was awarded $15,000 in support of her research.

Alyssa is a co-founder of Aglow Trio with flutist Karen Large and pianist Amanda Arrington.  Aglow Trio (a trio for flute, oboe, and piano) is dedicated to bringing light and optimism to their audiences by carefully curating programs aimed at highlighting new and unique voices.  Aglow Trio was a featured performing ensemble at the 2021 World Flutes Festival, the National Association of College Winds and Percussion Instructors Conference, and the Flute New Music Consortium Conference.

Regarding her equally expansive work as a composer, Alyssa’s chamber music is performed extensively around the world.  Alyssa was a recipient of an International Barlow Composition Commission, and she was the Composer-In-Residence for the River Oaks Chamber Orchestra’s 2020-2021 season.  Her music has been presented at several International Double Reed Conventions, the Japan Double Reed Society Convention, the National Flute Association Convention, the National Clarinet Association’s ClarinetFest, and the Society of Composers Inc. National Convention.

Her music is published by TrevCo Music Publishing and C. Alan Publishing, and has been recorded on the Blue Griffin, Centaur, Equilibrium, MSR Classics, Parma, and Tantara labels.  Alyssa can be heard performing on the MSR Classics label, in her solo albums “A Higher Place” (2018) and “Ruminations” (2022.) Fanfare magazine writes the following about her album “A Higher Place:”

Alyssa earned her BM and MM degrees in oboe performance at Brigham Young University, where she studied with Dr. Geralyn Giovannetti.  She earned her DMA in oboe performance with a cognate in composition at the University of Cincinnati College-Conservatory of Music where she studied with Dr. Mark Ostoich, Dwight Parry, and Lon Bussell.  She lives in Kansas with her husband and two children.  They enjoy  exploring the beautiful midwestern prairies together.

“Exceptional…soulful…engaging and appealing, not at all predictable…Morris brings something that we don’t always hear in the music of our time–wit. Add to this a true melodic gift, an ability to evoke a range of moods, and a strong imagination, and the result is a composer whose music is gratifying even on repeated hearings.”

Heather Baxter joined the Omaha Symphony in 2015 as Assistant Principal/Second Oboe and English Horn. Prior to her move to Omaha, Heather performed with several orchestras throughout Indiana, Ohio, and Kentucky, including the Richmond Symphony, Evansville and Lexington philharmonics, Dayton Philharmonic Orchestra, Kentucky Symphony Orchestra, and Orchestra Kentucky of Bowling Green, among others, while completing her doctorate in oboe performance at the College-Conservatory of Music (CCM) of the University of Cincinnati.

Heather has had the privilege of studying with some of the country’s top teachers and performers, including Mark Ostoich at CCM, Cally Banham of the St. Louis Symphony Orchestra, Humbert Lucarelli at the Hartt School while completing her master of music degree, and Ann Homann Mottl at Southern Illinois University at Edwardsville while completing her bachelor of music degree. She also has performed in masterclass settings for John Mack, Ray Still, Washington Barella, Casey Hill, and Karen Birch Blundell, among others, and studied with Robert Atherholt and Anne Leek at the Texas Music Festival. 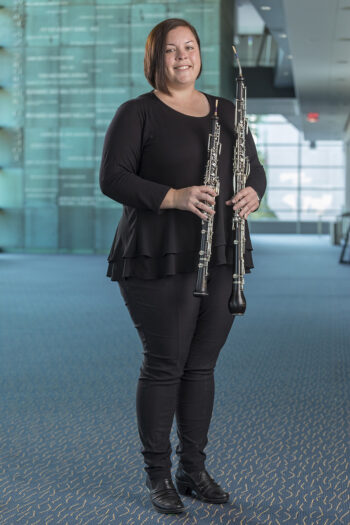 In her free time Heather enjoys hiking and rollerblading with her dog, Skye and spending time with her cat, Dill. She also loves boardgames with friends, particularly Settlers of Catan.