Organist Dr. Christopher Marks from the University of Nebraska – Lincoln and violist Clark Potter from the Lincoln Symphony present “Leap of Faith: Music You’ve Never Heard,” a program of little-known works for organ and viola. Composers include J.S. Bach (1685-1750), Petr Eben (1929-2007), and Marco Anzoletti (1866-1929). The program will be recorded in the sanctuary of Presbyterian Church of the Cross in Omaha and will feature the Hutchings/McFarland organ.

Organist Dr. Christopher Marks from the University of Nebraska – Lincoln and violist Clark Potter from the Lincoln Symphony present “Leap of Faith: Music You’ve Never Heard,” a program of little-known works for organ and viola. Composers include J.S. Bach (1685-1750), Petr Eben (1929-2007), and Marco Anzoletti (1866-1929). The program will be recorded in the sanctuary of Presbyterian Church of the Cross in Omaha and will feature the Hutchings/McFarland organ.

Johann Sebastian Bach’s fantasy on the Pentecost chorale “Komm Heiliger Geist” is the first piece in a collection known as the “Great Eighteen Chorales”, a set of organ chorale preludes compiled by Bach in Leipzig in the 1740s.  The chorale melody in this fantasy is found in long sustained notes in the pedal, while the hands play faster 16th-note figuration.  The ascending major-triad arpeggiating motive at the very beginning of the piece is heard again many times and lends the piece a joy and exuberance appropriate to Pentecost.  This figuration is quite similar to the opening of the Anzoletti sonata that closes this program and is even in the same key of F major.

Friedrich Metzler was a German organist and composer.  This partita (used here in the early Baroque meaning of the word to indicate a set of short variations on a theme) is based on the German hymn “Die Sonn hat sich mit ihrem Glanz gewendet”, loosely translated as “The sun has turned its light away”.  A prayerful evening hymn commemorating the closing of the day, the text gives thanks and asks forgiveness.  The musical setting by Metzler reflects the introspective nature of the text.  Each short movement corresponds to one verse of the hymn and takes advantage of the rich, dark combination of viola and organ.

Bach’s six cello suites have become a staple in the repertoire, but the sixth suite is performed much less frequently because it was originally composed for a 5-stringed bass instrument of some kind. Viola players love to play the suites as well, as the cello and viola are tuned the same, albeit separated by an octave. This instrument being played today was provided to the University of Nebraska-Lincoln thanks to a gift from the Constance Miriam Syford & Ethel Corrine Syford Memorial Fund which supports faculty research. The sixth suite is the last of the six to be humbly edited by Clark Potter. While many versions of the piece do exist for 4-stringed viola, Mr. Potter preferred to wait until he could get a 5-stringed viola in his hands. Bach explored the entire range made possible by the addition of a fifth string, and the Prelude requires more than three and one-half octaves.

Petr Eben was a Czech composer who wrote extensively for organ and also had a keen interest in writing for other instruments in combination with organ.  About this specific combination, he wrote “The sombre, astringent sound of the viola in conjunction with the organ evoked in my mind the mood of Advent.  This explains why I chose to quote the Introitus for the fourth Sunday in Advent, the Gregorian Rorate coeli desuper.  The overall progression of the work, a gradual transition from dark to light, is in keeping with the Advent season.”  Eben only hints at the Gregorian chant melody through the opening of the piece, but we begin to hear more fully realized melodic gestures in the organ as the piece progresses towards light.  Throughout, we hear Eben’s trademark use of rich, acerbic harmonies and a high degree of freedom between the two performers, who often work quite independently.

Marco Anzoletti’s Sonata in Fa maggiore per viola e organo (1904) was published for the first time in 2018 by Kenneth Martinson, who provided the following notes about the pieces: “Anzoletti was born into a family of musicians, learning the rudiments of music from his father Louis who was a cellist. His early studies included violin and composition lessons at the Milan Conservatory in 1879, and later on he went to Vienna for advanced studies with Jacob Grün. Eventually, Anzoletti settled in Milan in 1889 after being appointed to his former teacher’s position, a post he held until his retirement in 1928. Anzoletti maintained a studio of violinists and violists while in his spare time maintaining an active life as a prolific composer. Anzoletti wrote a vast amount of chamber music – about 359 works – the majority of that being music for violin and piano, as well as about 30 concertos. In addition to his two books of 12 Studies for viola, other works for viola by Anzoletti include: Scherzo for viola and piano, 7 Composizioni for viola and piano, Sonata in Bb for viola and piano, Sonata in Eb for viola and cello, 2 viola concertos, and 2 concertos for violin, viola and orchestra.”

It is unclear whether today’s sonata was ever heard in the composer’s lifetime, and this is likely the Nebraska premiere (as with all the pieces on the program, perhaps??). The piece features a declamatory and lengthy first movement, a quick and light Scherzo, a majestic “chorale” for the third movement, and a fourth movement that starts in the fashion of a fugue and finishes with an extended viola cadenza in which music from each of the previous movements are revisited.

Christopher Marks is consistently praised by reviewers for “style and assurance” and “musicality [that] seems to flow effortlessly”.  With his series of recordings of music by Seth Bingham and his many performances on historic American instruments, he has gained a reputation as an expert in American organ music old and new.

“Marks … played … with great élan. … Marks is a rapidly rising young star … who performed with great style and assurance.” – The Diapason

“A sparkling performance” – The American Organist

“Throughout this disc of really interesting and frequently quite difficult music, Marks changes tonal color with panache and alacrity. His musicality seems to flow effortlessly.”  The Journal of the Association of Anglican Musicians, reviewing Organ Music of Seth Bingham, Vol. 2 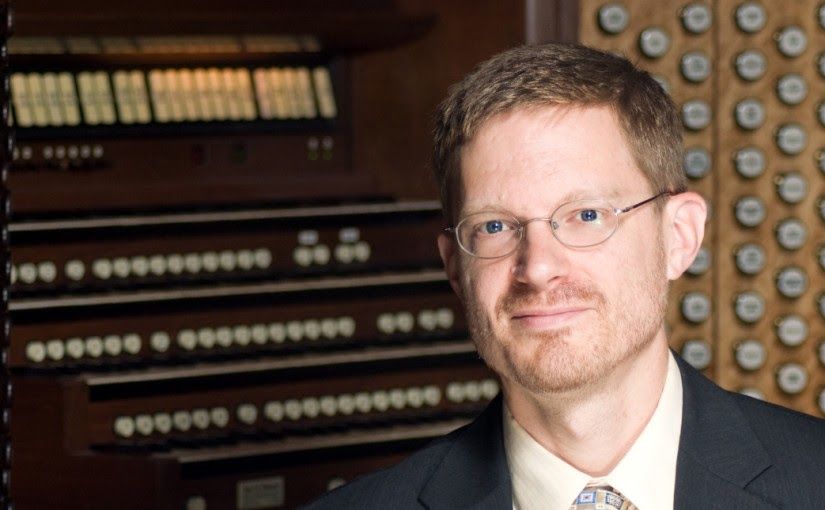 A native of Longview, Washington, Clark Potter is Professor of Viola at the Glenn Korff School of Music at the University of Nebraska – Lincoln, where he also serves on the conducting faculty and directs NEBratsche, the viola ensemble at UNL.  Mr. Potter is principal viola of the Lincoln Symphony and violist of two professional chamber music ensembles. As the conductor of the Lincoln Youth Symphony since 2007, Potter has directed concerts in Rome, Prague, Leipzig, Budapest, Vienna, Dublin and Belfast. He has conducted All-State Middle School Orchestras in Iowa, Oregon and Alabama, and he is in demand as an adjudicator and clinician at schools in Nebraska and around the region. In 2008, he was honored as the String Educator of the Year in Nebraska by the American String Teachers Association.

Mr. Potter’s research interests include the study of breathing habits of upper string players, having worked for several years with faculty and students of UNL’s Biological Systems Engineering department to develop an instrument which measures breathing rates while playing the violin or viola. He is also finishing his own edition of the Bach cello suites for viola and is investigating the concert works of Ernest Gold.

Prior to his appointment at Nebraska, Mr. Potter taught nine years at Eastern Oregon University, where he was professor of strings and conductor of the Grande Ronde Symphony. He received his graduate degrees from Indiana University and California Institute of the Arts and his bachelor’s degree from Western Washington University. His teachers include James Dunham, Charmian Gadd, Richard Goldner, Peter Marsh and Mimi Zweig.

Clark would rather be at home than anywhere else in the world, enjoying time with his family (wife, Jan, and two children and their spouses). He loves running and racing on roads and trails. 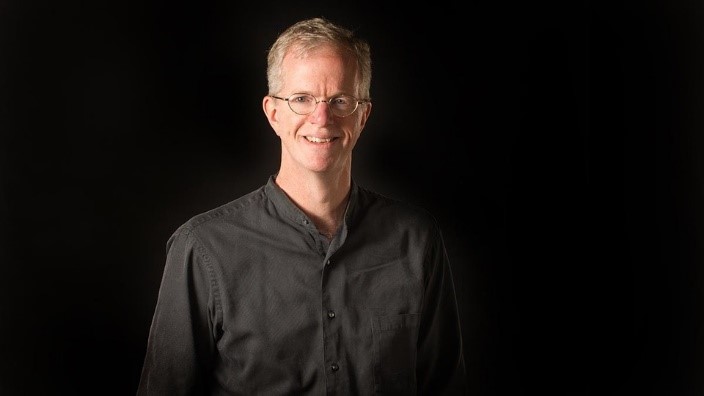 On a cold Monday night in December 1979, the Session of Presbyterian Church of the Cross received a stunning letter stating that a large monetary gift was being given to construct a pipe organ in the sanctuary.

James R. McFarland of Millersville, PA, was selected as the builder. McFarland envisioned an organ that would be unique to the Omaha area. It was to be a new organ making use of some recycled organ components from a pre-existing American organ. Portions came from an instrument built in 1895 by the well-known Boston builder, George S. Hutchings. The Hutchings organ served for many years in the First Parish Church of Watertown, Massachusetts.

Much of the organ you see and hear today including about half the pipework, the windchests for the manuals, the keyboards, stop knobs, and reservoir have been in existence for over a hundred years. Most of the organ was built specially for this project including pipework, case, key, stop, and combination actions.

McFarland arrived with a crew to begin installation of the organ on January 23, 1987. The first stop of the organ was heard in church on Mother’s Day of that year. In June of 1987 personal and professional considerations made it impossible for McFarland to continue with the project. At that time, Mr. Philip Beaudry, a noted organ builder from Lowell, MA, assumed directorship of the installation responsible for the completion of the physical installation and voicing assisted by Mr. Mark Vik of Cathlamet, WA. These gentlemen worked until March of 1988 to assure a satisfactory completion of the organ.